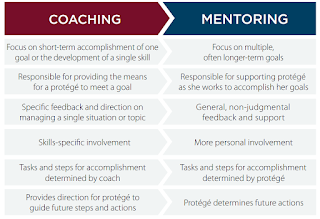 A mentor is someone who shares their knowledge, skills and/or experience, to help another to develop and grow. A coach is someone who provides guidance to a client on their goals and helps them reach their full potential.

In Toastmasters International, we have a mentoring program, and I suppose this is not obligatory. A mentor is an experienced toastmasters member who provides guidance and support to empower protégés to reach their goals.

To become a mentor, a member must be in good standing for at least six months, complete an entire path, and successfully complete mentorship training with positive evaluations from protégés. Each mentorship commitment lasts for a period of six months but may extend longer if both protégé and mentor agree.

So, are Mentoring and Coaching the same?

Mentors and coaches are often thought of as having similar roles. The two positions can overlap but are actually very different. Coaching can be part of the mentorship, but mentors are not coaches.

There are differences between mentoring and coaching:

Coaching focus on the short-term accomplishment of one goal or the development of a single skill. While mentoring focuses on multiple, often longer-term goals.

Coaching responsibly for providing the means for a protégé to meet a goal. While mentoring responsible for supporting protégé as she works to accomplish her goals.

Then in coaching, it provides direction for protégé to guide future steps and actions. While in mentoring, protégé determines future actions

I was a protege in 2019. During that time my mentor was Ewelina Durlak. She helped me to determine the tasks and steps needed to achieve my goals through discussions we had and she accompanied me while I am practising. We focused on longer-term goals such as being a great speaker that covers the aspects of speech such as clarity, vocal variety, eye contact, gestures, audience awareness, comfort level, interest and topic. As a result, I become a better speaker than before. But it was held for short time due to the limited time we have. I was a member of toastmasters for less than 1 term. A similar thing has happened when I was the toastmaster's member at the University of Indonesia Toastmasters Club. The mentorship program was not popular in our club I suppose.

Instead, I am really helpful by the comments that you gave me after my speeches. In my opinion, I count this as coaching, because the comments given were based on my speech that happened at that time. Although it's just in the form of small notes, it really helps me to observe what is my weaknesses. After observing which elements of speech I need to improve on, therefore I can focus on this part.

Fellow toastmasters and guests, we have learned about the difference between a coach (the one who directed me in how to repair a broken ceiling fan in my new home) and a mentor (the one who encouraged me to try to do it myself). I need to have a mentor to speedy improve my public speaking skills, and I'm looking for it in this club. Hopefully, I will find my new mentor. I would like to close this with a quote from Oprah Winfrey that “A mentor is someone who allows you to see the hope inside yourself.”.