Things I have learned as a leader – communication style 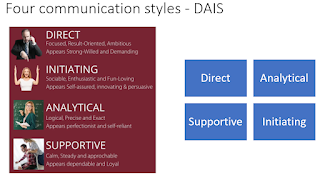 Communication is the act of giving, receiving, and sharing information -- in other words, talking or writing, and listening or reading.

I was the leader of PPI Polandia (Indonesian Students Association in Poland) period 2020/2021. Fyi, PPI Polandia is a branch of the EU-US PPI Region, as well as a member of the World PPI), and it aims to unite the Indonesian students in Poland with aims to maintain the good name of Indonesia, introduce Indonesia to the world, and increase student interest in studying abroad. In PPI Polandia, I managed 32 teams with hundreds of members.

There are 4 communication styles based on the toastmaster modules: direct, initiating, supportive, and analytical. Direct communicators tend to speak directly and are focus-oriented. and appears strong-willed. Then, the initiating communicator likely to be a sociable and loving person also appears self-assured and persuasive. While supportive communicator tends to calm, appears dependable and loyal. The last is an analytical communicator that speaks logical, precise and exact with the appearance of self-resilience. My current communication style is analytical. I am self-reliant and diplomatic. I try my best to solve problems in the organization.

I need to maintain effective communication not only internally (my core team and team members), but also externally (in this case to World PPI, EU-US PPI region, the Indonesian embassy in Warsaw, as well as other stakeholders). Based on feedback and outcomes, the Indonesian embassy in Warsaw’s feedback is that they are satisfied with my performance and communication style. The events went well and there were no major problems that happened. The similar feedback I also received from my staff. most of them said I was responded quickly after they’re ask for help and let them express their opinions and votes while biweekly for the core team and monthly meeting for the entire team.

But I encountered also minor feedbacks about some miscommunication that happened when it comes to online chat, as well as the ignorance of some people who doesn’t have any contribution to the organization. I tried to approach them, by person, or just via calls because of the far distance. in the case of by person, I tried to use another style. I recognized that he has a different communication style than me, which probably initiated communication. Therefore I tried to be friendly with him by letting him speak more, to express their feelings and opinion. During that time, he admitted that he is not active while his role is so crucial for an organization. Moreover, he had an idea to do meetings in person in Warsaw. But after that meetings, he was not active anymore and most of us tried to motivate him to be responsible for his job, but the results were none. Yeah, at least we’ve tried so hard, then his job was passed to vice-president or me sometimes.

In the case of online chats or online zoom meetings, I tried to use polite and clear words, because in the Indonesian language, we used a lot of slang and we shortened words a lot, especially to people of the same age. Although most of my staff are older than me, yet I still try to use friendly words. I tried to ensure what they’d said by reading the summarize of the meeting or just by asking. With the external stakeholders, for example, the Indonesian embassy in Warsaw I used more formal words instead and tried to respond to them clearly. At least I tried to minimize the miscommunication between me and my teams. I realized that at some point I need to recognize if my style is suited for their needs. For a sociable person, I tried to listen more, for the direct person I tried to speak more. By meeting them several times I can see or predict their major communication styles.

To sum up, there are 4 communication styles: direct, initiating, supportive, and analytical. I’d rather be more on the analytical communication side that speaks logical, precise and exact with the appearance of purpose, self-resilience and perfectionist. By tailoring my communication style to match situational expectations, I can achieve effective communication that leads to higher efficiency in the organization.

I’d like to pass the quote from Tony Alessandra that said “Misunderstandings happen because we do not understand that different people have different styles of communication”.